Hopes for a New Kind of Malaria Vaccine 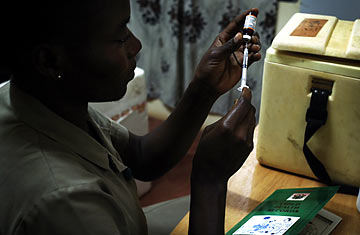 Hopes for a New Kind of Malaria Vaccine

Malaria was eradicated in the U.S. by 1951, so Americans can be forgiven for not giving the disease much thought. But the mosquito-borne scourge is responsible for the deaths of nearly a million children under age 5 each year — mostly in Africa — killing one child every 30 seconds. Half the world's population remains at risk — including travelers to affected countries.

Malaria was eradicated in the U.S. by 1951, so Americans can be forgiven for not giving the disease much thought. But the mosquito-borne scourge is responsible for the deaths of nearly a million children under age 5 each year — mostly in Africa — killing one child every 30 seconds. Half the world's population remains at risk — including travelers to affected countries.

But while initiatives to provide insecticide-treated bed nets and other control measures have cut malaria rates in half in some countries, the disease is adapting, and insecticide-resistant and treatment-resistant strains are increasingly problematic. And the worldwide recession is reducing the funding available to keep malaria-control initiatives going. As a new avenue of attack, the PATH Malaria Vaccine Initiative (MVI) — which is funded by the Bill & Melinda Gates Foundation — on Friday, Jan. 15, announced a collaboration with the Johns Hopkins Bloomberg School of Public Health and the Sabin Vaccine Institute to create a whole new kind of malaria vaccine. Called a transmission-blocking vaccine (TBV), it is aimed not at protecting individuals from the disease but at preventing mosquitoes that carry it from spreading it.

"I think it's very encouraging," says Dr. Lee Hall, chief of the Parasitology and International Programs branch of the National Institute of Allergy and Infectious Diseases (NIAID). "It's a big endorsement by MVI for this general approach."

Traditional vaccines work by introducing a killed or weakened version of a disease into the body, where the immune system spots it and cranks out antibodies against it. Then, if a wild strain of the pathogen comes along later — one that has the power to sicken or kill — the body is ready for it. The new approach is different. Developed by Rhoel Dinglasan, an entomologist and biologist at Johns Hopkins University Hospital, it would instead work within the mosquito gut.

Dinglasan has found an antigen, called AnAPN1, that causes humans to create antibodies that prevent transmission of malaria by mosquitoes. Get enough of these antibodies into mosquitoes, and you lock the disease up there and prevent it from infecting us. Sounds good, but how do you implement such a strategy? You can hardly vaccinate the mosquitoes themselves. Instead, you put the AnAPN1 into their food source: us. A mosquito that bites an inoculated person would pick up the antibodies and then be sidelined from the malaria-transmission game.

The new vaccine is not the first TBV attempted. Previous versions used not AnAPN1 but parts of the malaria parasite to generate human immune responses. Unfortunately, two vaccine candidates using that approach unexpectedly caused some skin disorders when tested in humans in 2008, prompting a need for further research. And even without that side effect, using antigens from the malaria parasite would require multiple vaccines to fight the many different strains of malaria.

Malaria TBVs can be problematic, and not just because none has been perfected yet. People would have to step forward to receive a vaccine that would not make them immune to malaria; they would instead become part of a growing web of people who would eventually push the parasite out of circulation. That complicates the risk-benefit calculus. Every vaccine, after all, can have side effects — in some cases, the possibility of contracting the disease itself. Typically, people are willing to accept that danger because they want the immunity. The AnAPN1 vaccine has been tested in human blood only in the lab, and while it's effective there, no one knows if it causes any negative reactions in people.

To make a TBV more more attractive, then, epidemiologists do not plan to administer it by itself. Rather, it would be given along with a traditional immunity-conferring vaccine. "Not a single person thinks that you should give a transmission-blocking vaccine alone," says Dinglasan. "You'd give it in combination."

This would also help the vaccine get past regulators at agencies like the FDA. Medications are approved based on an "indication," a medical problem or risk suffered by an individual. If a TBV were not part of a combination vaccine, this "indication" would be hard to define. Of course, the traditional vaccine that would make the TBV acceptable doesn't exist yet either, but progress is being made on that front. Right now, for example, PATH MVI is testing a vaccine called RTSS, which reduced risk of infection for one strain of the disease at least 50% in late-stage clinical trials for 16,000 infants in Africa — not perfect, but still useful in places where 25% of infant deaths are caused by malaria.

It's Dinglasan's TBV, though, that's really sparking the excitement in the field. One reason is its robustness. The vaccine so far works against the major types of malaria and all species of mosquitoes tested — critical if the disease is going to be not just controlled but snuffed out entirely. "We're working towards eventual eradication," explains Dr. Ashley Birkett, director of preclinical research and development at PATH MVI. "It requires a long-term vision, and we really think a vaccine that can block transmission from one person to another is going to be a critical tool."

Not only would malaria eradication save millions of lives, it would also free up many countries from the crushing costs of dealing with the disease — costs that make economic growth impossible. The American economy, when it is not in recession, has typically grown about 3% per year since the 1970s. Countries with malaria, by contrast, lose 1.3% of that potential growth — nearly half — just to the consequences of the disease, according to a study by leading global economist Jeffrey Sachs. "It's like a huge tax on economic growth," says Hall.

Dinglasan — who comes from the Philippines, where some islands are still affected by malaria — sees things in a more basic way. Malaria, he says, is "a dark cloud. We're talking about the deaths of small children. They can't get past the age of 5. I don't know if you can measure the full impact of that." You can't. Nor can you measure the sense of global relief when that kind of suffering is over for good.